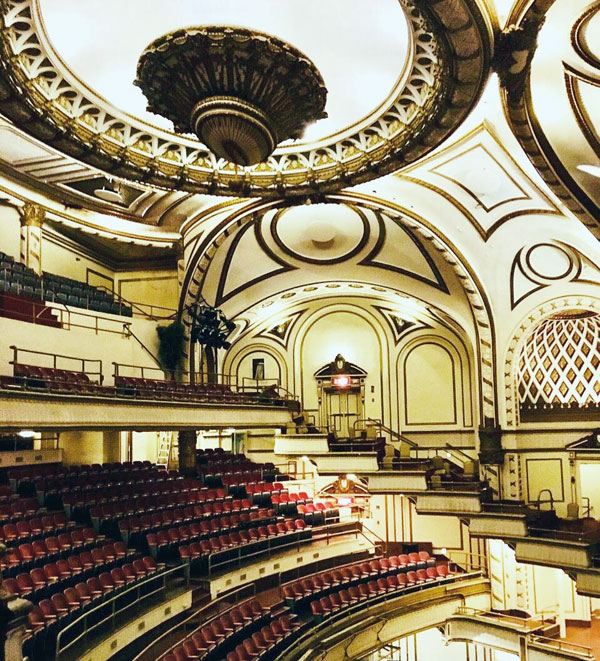 Built in 1917, the Orpheum Theater (formerly the American Theater) in St. Louis has been shuttered and dark for almost a decade. This beautiful example of Beaux-Arts from the turn of the century is now being fully restored inside to capture its breathtaking decor and architecture. The magnificent dome ceiling has been saved and is being restored to its original splendor. Every light bulb, decoration, brass rail, seat, and row is being treated with the utmost care, bringing back its vibrance and beauty. Original vintage photos are being used to restore the theater to its grand opening condition at the turn of the century. This iconic theater is a St. Louis gem and is one of the last oldest remaining theaters in the city from the vaudeville era.

The Orpheum Theater in St. Louis is a testament to the city’s vaudeville past of the turn of the century. Built in 1917, it is currently downtown’s most sumptuous and voluptuous Beaux Arts building. One of the city’s most outstanding examples of Beaux-Arts Classicism of its time. The Theater is distinguished by an unusually fine terra cotta facade featuring monumental figural and decorative sculptures and richly ornamented interior. Although previous Orpheum acts had been shown at the Columbia Theater, the newly built Orpheum Theater was the first St. Louis theater totally devoted to Orpheum bookings and shows. This secured the circuit for the city and downtown thus expanding the entertainment sector.

A technological advancement of its time, the theater featured modern ventilation systems that circulated air, heating, fine acoustics throughout the venue, and most up to date electrical for lighting equipment.

It was constructed by local self-made millionaire Louis A. Cella and designed by architect Albert Lansburgh which still stands in its magnificence today. The first lodging and entertainment to appear downtown were the Orpheum Theater and the Statler Hotel, both completed side by side on 9th Street. The theater opened on Labor Day, 1917 as a vaudeville house until the mid 1930’s when it was utilized by Warner Brothers as a movie house. More History